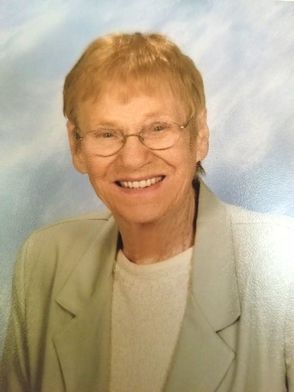 Yvonne B. Junge, age 90 of York, NE passed away peacefully, Friday, November 9, 2018 at York. She was born August 24, 1928 at Waco, NE to Paul and Dorothea (Wellman) Gocke. Yvonne was baptized on September 16, 1928 at St. John's Lutheran Church in Waco, where she would later be confirmed on March 29, 1942. Whereafter she was an active member of Emmanuel Lutheran Church in York.  On June 20, 1948 she was married to Lowell Junge at Waco, NE. She was a longtime York area gifted seamstress, having worked at Countryside Fabrics and Freddie’s Fabrics. She continued her love of sewing with in-home alterations, never charging military or law enforcement for alterations. She enjoyed entering her handiwork in the County Fair, later serving as Superintendent. Other hobbies include: gardening, quilting and embroidery. Always volunteering, she loved helping people whenever/however she could. Yvonne loved her family and was always there for them.

After retiring she enjoyed working as an I-80 tourist guide, sharing with all she met about the great state of Nebraska.  She was a proud lifelong York resident. Being selected as 1996 Yorkfest Queen was an honor she cherished.

She is survived by her son Steven (Frances) Junge of Kearney, NE, daughters Loretta (George) Kubitschek of Westminster, CO and Diane (Dale) Klein of Minnesota, 7 grandchildren, 11 great grandchildren, and 10 nieces and nephews .Also surviving is her sister LaDonna Richert of York.

She was preceded in death by her parents, husband, son Marvin, infant daughter Kay Ann and brother-in-law Arnold Richert.

Funeral services are scheduled for 10:00 am Friday, November 16, 2018 at Emmanuel Lutheran Church in York with burial in York’s Greenwood Cemetery. Visitation will be held from 1-8:00 pm Thursday with her family greeting friends later that evening from 6-7:30 pm at the mortuary. Memorials may be directed to Emmanuel Lutheran Church, Emmanuel – Faith Lutheran School or to the donor’s choice.