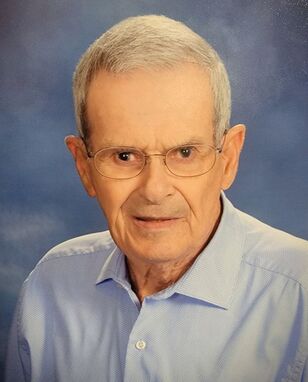 Wayne Eldon Sandall of York, Nebraska died on October 18, 2022 at his home, shortly before his 88th birthday. He met Marlus Gocke and they began a beautiful love story. They were married on April 12th, 1959 at Immanuel Lutheran Church north of Utica, Nebraska. They enjoyed over 63 years of marriage together.

Wayne was born on December 1, 1934 to Rudolph Leonard Sandall and Clara Mabel (Johnson) Sandall.  He graduated from York High School in May of 1952. He joined the Army National Guard in 1952 and served for 9 years. Wayne was a farmer. He helped take over the family farm at an early age with his brother, Arnold, after his father was stricken with polio. He farmed in York County for many years while also raising livestock.

He was a Sunday school teacher and an elder at Emmanuel Lutheran Church in York. He served on the York County Extension Board, the Bradshaw School Board, and the Board of the Bradshaw Fire Department for many years. He enjoyed woodworking, building and flying model airplanes, and spending time with his family. He is fondly remembered for his sense of humor. Wayne met all of life's challenges and joys with strength and courage. He devoted his life to God and his family.

He is preceded in death by his parents, along with his sister, Elaine Corona of Modesto, California and his brother, Arnold Sandall of York, Nebraska.

Funeral services are scheduled for 2:00 pm, Monday, October 24, 2022 at Emmanuel Lutheran Church in York. Burial will follow at Bethesda Lutheran Cemetery, on Hwy 34 west of York. Visitation will be held from 1-8 pm this Sunday with his family greeting friends from 6-7:30 pm later that evening at the mortuary. Memorials may be directed to Norfolk Orphan Grain Train, Bethesda Lutheran Cemetery, or Tabitha Hospice Care.