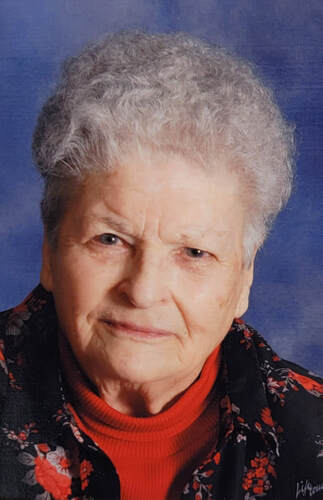 Wanda was a farm wife and a homemaker. She was a member of St. Joseph Catholic Church in York and was member of the alter society there. She enjoyed crafts, painting, sewing and quilting.

She is survived by her brother Douglas (Lois) Underwood of Phoenix, AZ, brother-in-law:, Dean Theiszen of Aurora, NE, sisters-in-law Jalane Underwood and Elsie Sullivan both of York, and many nieces and nephews.

She was preceded in death by her husband, two brothers, and four sisters.
​
A Mass of Christian Burial will be held at 10:00 am, Thursday, March 24, 2022 at St. Joseph Catholic Church in York. Burial will follow at St. Joseph Cemetery, York. A rosary will be said at 6:00 pm on Wednesday at the mortuary. Visitation will be held from 1-8 pm on Wednesday at the mortuary. Memorials may be directed to the family for later designation.
​
​Condolences may be emailed to Metz Mortuary Messages will be given to the family.
Find our featured Mortuary in Family Services, Funeral Services and Grievance Services featured as a York, Nebraska Business in York Marketplace.
Location: Metz Mortuary | 109 South Lincoln Ave | York, Nebraska 68467 | Phone: 402-362-3351