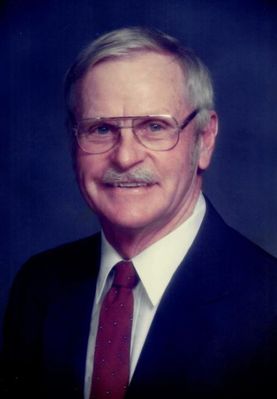 Walter ‘Walt’ Leroy Goossen, 91, passed from this earth and went to be with his Lord Thursday, August 23, 2018 at the Henderson Nursing Home. Walter Goossen was born to Abraham J. Goossen and Aganetha Kliewer Goossen on December 31, 1926. He was the youngest of nine children.

He graduated from Henderson High School in 1944 and soon a young lady by the name of Darlene Peters caught his attention. He said she had a “special sparkle” in her eye. Walter asked for her hand in marriage and that ceremony occurred in January of 1949. Within two years of marriage they gave birth to a beautiful baby girl which they named Brenda. Soon after, a rambunctious and handsome little boy was born, and he bore the name of Charles. After a seven year lull a cute and chubby second son was born to Walter and Darlene. His name was Bradley. He was the son who followed in the footsteps of his father and became a farmer. Then three years later another pretty girl was born into the family. This child bore the name of Jeanine.

Walter Goossen suffered from painful arthritis most of his life but that didn’t stop him from working hard and contributing to the community and his church. He served on the school and hospital board. He was a treasurer and trustee of the MB church and a cemetery sexton for that same church. In addition he was a member of the golf association and served in leadership roles on the bank and coop board. One of the desires of his heart was to assist young farmers in their quest to become successful. This desire shaped many of his decisions in farming.

Walter always had a kind word to share with anyone and loved telling jokes to see others crack a smile. His sense of humor became more acute as he grew older and he had more time to relax.

Graveside services are scheduled for 9:30 a.m., Monday, August 27, 2018 at the Mennonite Brethren Cemetery with the Reverends Luke Haidle and Jay Epp officiating. A memorial service will follow at 10:30 a.m., at the Mennonite Brethren Church in Henderson. Visitation will be Sunday from 1:00-9:00 p.m., with his family greeting friends from 7:00-9:00 p.m., that same evening at the mortuary in Henderson. Memorials may be directed to CRU (Organization with which Jennifer Goossen is affiliated) or to the Mennonite Disaster Service.