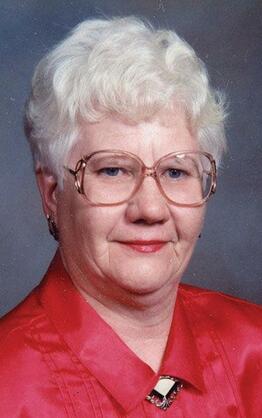 Vivian J. Obermier age 84 of York, peacefully left this earth to be with her savior Tuesday, Dec. 27, 2016 at York General Hearthstone.

She was born April 21, 1932 in Seward to George and Hanna Noler. Vivian was baptized and confirmed at St. John’s Lutheran Church in Cordova. She graduated from Friend High School in 1949. After graduation she worked at Youkel’s Hardware until she was married.

On Feb. 13, 1955 Vivian was united in holy matrimony to Virgil Obermier at St. John’s Lutheran Church in Waco. Three sons were born from this union.

Vivian’s love for God was as beautiful as the flowers she adored. She loved to garden, attend garage sales, restore dolls and mend clothes for the Orphan Grain Train. Her culinary skills were second to none.  Vivian’s generous spirit and pleasant personality made her loved by many. She treasured spending time with her family and spoiling her grandchildren.  Her influence will forever remain in the lives of all who knew her.

She was preceded in death by her parents and her son Paul.

Vivian is survived by her husband, Virgil of York; her two sons, Jerry (Jean) Obermier of Lincoln and Roger (Lisa) Obermier of York. Her two grandsons are Wesley (Nena) Obermier and Wade (Crissa) Obermier all of York. Also surviving are two sisters, Vera Huebert of Lake Havasu, Ariz. and Verna Petersen of Beaver Crossing.

A graveside service was held Tuesday, Dec. 27, 2016 at St. John’s Lutheran Cemetery. A celebration of life will be held at 10 a.m. on Saturday, Dec. 31, 2016 at Faith Lutheran Church in York. In lieu of flowers, memorials may be directed to the family to be distributed amongst the Orphan Grain Train, Mission Central, and Faith Lutheran Church.​