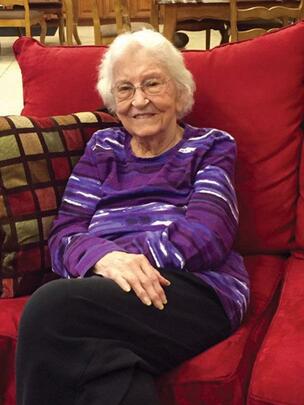 Virginia (Elrod) Hogan passed away peacefully in her sleep on Monday, Nov. 14, 2016 in Bountiful, Utah where she had lived since 2009.

Virginia was born in Memphis, Tenn. on April 8, 1918, the only child of Fred and Addie (Poor) Elrod. Her parents died when she was an infant and she was raised by her paternal grandparents, “Bob and Lizzie” Elrod in Bassett, Ark. She married Loran Hogan Jan. 2, 1940. Their only child Barbara Suzanne was born in 1941 and they resided in Missouri.

York High School for 15 years. After retirement in 1981 she was able to spend more time with Sue, her grandchildren and great grandchildren. In 2009, Virginia moved to Bountiful, Utah to be closer to her family. She was healthy and happy until a week before she passed.

Virginia is survived by her daughter, Suzanne Bombard of Bountiful, Utah; three grandchildren,

Sandy, Utah. Preceding her in death were her parents, grandparents and husband.

Memorial services will be held in her honor at 10 a.m., Monday Dec. 5, 2016, at Metz Mortuary in York, with the family greeting friends between 9:30 and 10 a.m. that morning. Inurnment will take place in the Greenwood Cemetery in York, following services at the Metz Mortuary. There will be a lunch prepared at the First Presbyterian Church following the graveside services. In lieu of flowers, the family asks for memorials to be directed to the Greenwood Cemetery in York.​