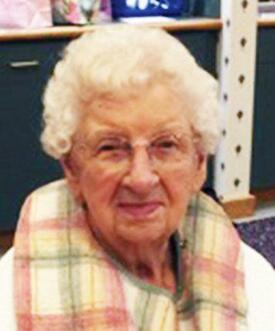 She was born July 24, 1915 near Arnold in Custer County to Gustav E. and Emma M. (Magnuson) Ostrom. Violet and Harvard Crawford were united in marriage on April 3, 1934 at North Platte.

They moved to York in 1949 where they owned and operated Harv & Vi’s Drive Inn for many years. After selling the business Violet worked as a cook in York Public Schools for 16 years. She was a member of the First Presbyterian Church in York, the Rebecca’s and Eastern Star.

Funeral services will be held at 10 a.m. on Monday, Feb. 8, 2016 at First Presbyterian Church in York.  Interment will be at 3 p.m. that afternoon in the Gothenburg Cemetery in Gothenburg. Visitation will be one hour prior to the funeral service at the church.  Memorials may be directed to the church.  ​