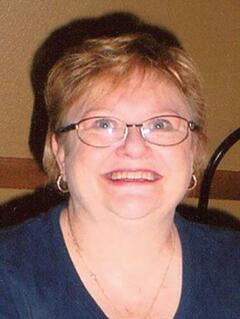 She was born March 7, 1946, in Stromsburg to Reuben and Marcella (Thomason) Hofmann. She married Robert D. Jacobsen Sept. 11, 1965, in Lushton and they lived in McCool Jct. He died in 2000. They had two children, a son Carl and daughter Pamela, who died in a car accident in 1984.

Vicki was a longtime cook at McCool Jct. Public Schools, where her cinnamon rolls were legendary, and she graciously allowed generations of kids to use her as human yardstick to measure growth — “Am I as tall as you yet?” Hard to imagine how a heart so big fit inside such a petite lady, who was known as “Vegas Vic” to her friends and “Grandma Jake” to her grandsons. When Vicki died, mourners who gathered looked for her to show up, tie on an apron and run the kitchen with her big smile, good humor and sass.

She sold Avon, was involved in the American Legion Auxiliary, United Methodist Women and Fellowship Youth and Red Cross and was in charge of the McCool Senior Meals program. If it needed done in McCool Jct., Vicki was one of the people you went to for help.

Left to cherish her memory is her son Carl Jacobsen and his wife Amy of York along with their children, Leo and Eli. Also surviving is her sister, Bobbie Morris of Lincoln; brothers-in-law, Bill Jacobsen and Chuck (Joan) Jacobsen of McCool Jct; sisters-in-law, Pat (Arlo) Kranau of Blue Hill and Glenda Jacobsen of McCool Jct; special friends, Cathy, Chris, Hannah and Jessie Broughton of York.

Vicki was preceded in death by her husband; daughter, Pam; infant sister, Donna May and brother, Bud Hoffman.

Funeral services will be held at 2 p.m., Tuesday, Nov. 25, 2014 at First United Methodist Church in York. Interment will be in Pleasant Ridge Cemetery, southeast of McCool Jct. Visitation will be from 1-9 p.m. Sunday and from 9 a.m. - 9 p.m. Monday at the mortuary. The family will receive friends Monday evening from 6-7:30 p.m. Memorials may be directed to the family for later designation.​