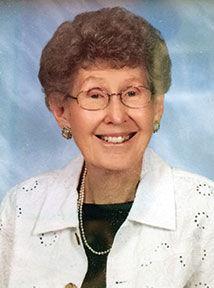 She was born July 3, 1921 at Goehner to John and Clara (Gaukel) Knipfel. Vera was united in marriage to Lloyd A. McLain on Nov. 8, 1941 at York. The union was blessed with three children, Barb, Jim and Janelle.  Vera received normal training to prepare her for teaching in rural schools.

She lived in the York area for most of her life and loved flowers, gardening and reading. Her children, grandchildren and great-grandchildren were her pride and joy. Vera was a member of Emmanuel Lutheran Church in York. Her strong faith and love for the Lord was an extreme comfort to her throughout her life.

Left to cherish her memory are her son, Jim McLain and his wife Kathy of Olathe, Kan.; daughters, Janelle Roth and husband Tom of Denton, Texas and Barb Stevens of Las Vegas, Nev.; eight grandchildren; 15 great-grandchildren; sisters, Ruth Harrison of York and Irene Utecht of Glenvil; brothers-in-law, Roy McLain and his wife Rosalie of York and Winton Wright and wife Maxine of Benedict; nieces, nephews and friends.

Vera was preceded in death by her parents; husband and two brothers, Carl and Bob, along with son-in-law Jerry Stevens and brothers-in law Denzel Harrison and Duane Utecht.