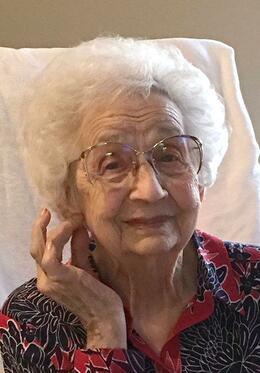 She grew up in a large family on farms and ranches in central Nebraska.

She married young and raised six children. She and her husband Hazen Smith purchased a weekly newspaper from his father Thurman Smith in 1941. The “Taylor Clarion” which they published for 35 years, remained in the family for over 60 years. Their paper received awards for “General Excellence” and Thelma received numerous awards for her columns, editorials, and photography. She was a member of the Nebraska Press Women and Writer’s Guild for many years.

Her husband Hazen of nearly 48 years died of a heart attack in 1979 while visiting in Lincoln. In 1981 Thelma re-married Paul Hill and lived in California and Oregon. She was widowed again in 1987 and she returned to Nebraska to be near her families. She then lived in York since May of 2002.

Thelma is survived by her children and their spouses: Jeanette Lewis of Taylor, NE, Leland (Dot) Smith of Foster, MO, Dan (Lynn) Smith of Council Bluffs, IA, and David (Susan) Smith of Norfolk, NE. Thelma is survived by her son-in-law Jim Sprague of York, step-children:  Gene (Eva) Hill, James (Helene)  Hill, and Lee Lamb, all of California, Margaret (Lewis) Shelton and David (Kathy) Hill, both of Oregon, along with many grandchildren, great-grandchildren, and great-great grandchildren.

Funeral services will be held at 10:30 am, Wednesday, April 5, 2017 at the Hitchcock Funeral Home in Burwell, Nebraska. Graveside services will follow at the Brewster Cemetery, Brewster, NE. Memorials may be directed to the First United Methodist Church in York, American Cancer Society, or American Heart Association. ​
​
Condolences may be emailed to Metz Mortuary Messages will be given to the family.