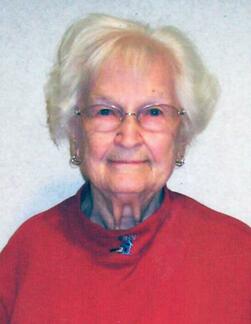 She was born Jan. 29, 1919 in Edgar to Jessie (Springer) Skinner and Clarence Skinner. Thelma attended country school in Nuckolls County and graduated from Edgar High School. She took normal training and taught at the same country school she attended.

Thelma married Wendell Lee on June 10, 1937.  They eventually moved to her childhood home in rural Edgar, Nuckolls County where they farmed.  They were Christian Church members, Eastern Star members and attended Lion’s Club events. Thelma belonged to a Nuckolls County Extension Club.  Upon Wendell’s retirement they moved to York.  Thelma started working at York General Hospital and worked up to being Ward Clerk and did that until 1989.

Wendell and Thelma enjoyed living in York —having close neighbors, not being snowed in far away from town and being closer to family! Wendell passed away in 1974. Thelma married Mel Brammer who passed away in 2001. In 2008 she lived in assisted living — first at Saunders House in Wahoo and then Mahoney House in York.

Thelma was preceded in death by her parents; husbands, Wendell and Mel; daughter Janis and granddaughter, Carrie Lee Inbody.

Funeral services will be held at 2 p.m. Saturday, March 19, 2016 at First Presbyterian Church in York with the Reverend Mike Eickhoff officiating.  Interment will be in York’s Greenwood Cemetery.  Visitation will be from 1-9 p.m. Friday at the mortuary and two hours prior to the service at the church. In lieu of flowers memorials may be directed to the First Presbyterian Church or CASA.​