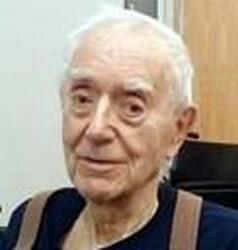 Telfer Lee Epp passed away on December 27, 2018.  After 89 years, he probably deserves something more lyrical but Telfer was invariably straight and to the point.

Telfer was the tenth child of Gerhard and Anna Penner Epp.  He was born on December 4, 1929 in Henderson, Nebraska, one month after the crash of ’29.   He and his family farm survived the drought and dust bowl years before the age of irrigation in Nebraska.  Telfer often spoke about life on the farm, his love for his mother’s cooking and his admiration for his dad’s work as a farmer, school superintendent and member of the Mennonite Church.

He attended a country grade school, District 37, and graduated from Henderson High School.  Telfer and his older brother Allen managed the family farm in the last few years before they entered York College together where he earned a B.A degree in History.  He subsequently earned his divinity degree from Central Baptist Theological Seminary and worked in Christian Education at First Baptist Church, Chariton Iowa.  Telfer often told the story of Carol’s Dad, Harry “Mose” McDowell, asking, “Who is the guy who keeps following Carol home for dinner?”  Telfer married Carol P. McDowell on April 14, 1956 in Chariton, Iowa.

They moved to Topeka, Kansas and had two sons, Dennis and Tim.  Telfer worked as a youth Minister at the First Baptist Church of Topeka, under Max Morgan, where he was ordained.  They then moved to St. Louis, Missouri where he was responsible for Christian Education under the tutelage of Dr. Edwin Dahlberg at Delmar Baptist Church.  During these years, Telfer enjoyed taking Carol and his two sons to St. Louis Cardinals baseball games where seats for clergy in the outfield were $0.50 each.  After the games, he took his family to an outdoor venue called Sam, Sam the Watermelon Man.  Telfer loved watermelon from his youth on the farm until the very end of his life.

In 1964, Telfer relocated his family to Des Moines, Iowa where he started work as Director of Christian Education for the Iowa Baptist Convention.  During this period, the American Baptist Churches of Iowa and Minnesota merged and Telfer served as Director of Christian Education and Camping, Associate Executive, Area Minister and was elected Executive Minister in 1978, where he served until his retirement 1994.  He was proud to have met Martin Luther King Jr., a fellow American Baptist Minister, at Dr. King’s church in Atlanta.  Telfer was an advocate of Dr. King’s dream of peace and social justice throughout his life.

During his years in Iowa, Telfer went on mission trips to Africa, Russia, Haiti, Central America and Mexico.  He smuggled aspirin into Congo and bibles into Russia, crimes for which he was never caught. He also traveled to Germany, Canada and Alaska.

Additionally, he earned a Doctor of Ministry degree from Midwestern Baptist Seminary and was honored with a Doctor of Divinity degree from Judson University.  He received a Distinguished Service Commendation from Central Seminary and was named Alumnus of the year.  Telfer chose to take his 3-month sabbatical at the University of Cambridge, England.  He and Carol also traveled to Scotland and Ireland.

Telfer was elected as a trustee for Central Seminary and Northern Seminary, University of Sioux Falls and the American Baptist Homes of the Midwest.  In addition he was active in ecumenical work as a Board member of the Iowa Inter-Church Forum and served a term as president of the Forum.  Through the years he was proud of these accomplishments but wore them on his shoulders lightly.  He rarely if ever listed his name with Dr. or Rev. before it, always preferring “Telfer”.

Telfer retired in 1994 and moved to Orange County, California to be near his children and grandchildren.  In retirement, he and Carol became avid bicyclists and participated in bike rides across Iowa (RAGBRAI 2 times) and Georgia (BRAG 3 times).  On his 70th birthday, he road 70 miles with his son Dennis.

After many years, he moved to New Orleans to live with Dennis, Linda and his wife Carol.  He was the main caretaker for Carol, who passed away in June, 2016 from Alzheimer’s complications.  One of his great joys in later life was reengaging with the American Baptists and joining the St. Charles Ave Baptist Church in New Orleans.  He also enjoyed watching the St. Louis Cardinals almost every day during baseball season and the Nebraska Cornhuskers in the fall.

Telfer outlived his mother, father, 9 siblings and his wife, Carol.  Telfer is survived by his sons Dennis (Linda Gordy) Epp, Tim (Susan Epp) and his grandchildren Erin Epp, Taylor Epp and Tanner Epp.  Every year, Telfer had one closing thought and prayer:  May the road rise up to meet you, May the wind always be at your back, May the sun shine warm upon your face, And the rains fall soft upon your fields, And until we meet again, May God hold you in the palm of His hand.

Relatives and friends were invited to attend his memorial on January 5th, at St. Charles Ave. Baptist Church, 7100 St. Charles Ave., New Orleans, LA.  The Service was held at 1:00 PM.

Graveside service will be held 1:00 PM, Saturday, January 26, 2018 at the Faith Evangelical Bible Cemetery, south of Henderson. No viewing or visitation as it was Telfer’s wish to be cremated.

In lieu of flowers, donations in his memory may be made to the St. Charles Ave. Baptist Church, http://www.scabc.org/