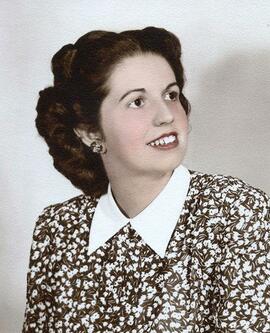 She was born Feb. 26, 1920 in York to Jesse Earl and Emma L. Casebeer Axtell. Sylvia lost her mother to pneumonia in 1930 when she was 10 years old. She attended District 13 country grade school 3 miles west of York until the 5th grade. She then came to York to live with her Grandparents Louella and Lemuel Casebeer during the week so she could attend York Public schools.

One cold wintry day when she was in high school, the water pipes in her grandparents’ house froze and they called Anderson Lumber of York to assist. The man they sent was Hubert Zieg. He took one look at Sylvia and knew that she was the one for him. After graduation from York High School in 1937, Sylvia attended class for one year at the University of Nebraska where she studied home economics.

On May 28, 1938, Hubert and Sylvia rode a motorcycle to Papillion to be married by the judge at the Sarpy County Courthouse. To this union four children, Charles Edward (Ed), Timothy (Tim), George and Michelle were born. Sylvia and Hubert made their home in York. A member of the First United Methodist Church in York she was a wonderful homemaker and mother and always welcomed friends and family into their home for a wonderful meal. She also enjoyed gardening and golfing.

Preceding her in death were her parents; her husband, Hubert of 64 years and 11 months; son, Charles Edward; her granddaughter, Gina Zieg; her sister, Marjorie Axtell Canipe; two brother-in-laws, Robert Zieg and Lew Canipe and step-mother, Esther.

Funeral services are scheduled for 2 p.m., Tuesday, April 25, 2017 at the First United Methodist Church in York with the Reverend Art Phillips officiating. Burial will be in York’s Greenwood Cemetery. Visitation will be from 1 - 8 p.m., Monday and then from 9 a.m., - Noon Tuesday at the mortuary and then one hour prior to services at the church. Memorials may be given to First United Methodist Church in York or Aseracare of York.​