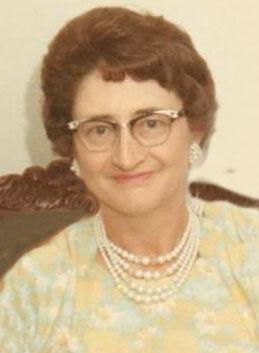 Sybil was united in marriage to James H. Tandy of Wichita, Kan., on July 20, 1938 in Kingman, Kan. They resided in Wichita for 64 years where Jim was a civil engineer for the city. After Jim’s retirement, the couple spent winters enjoying friends and fishing at Port Aransas, Texas. In 2004, Sybil and Jim moved to York, NE to be near their children.

She was preceded in death by her husband, James; brother, Fred Davis and wife Gerry; and brother-in-law, Louis Tandy and wife Ann.

Memorial services will also be held at 2 p.m., Thursday, March 26, 2015 at Emporia Avenue Church of Christ (1144 So. Emporia), Wichita, Kan. Private family inurnment will be held at Highland Cemetery, Wichita.

Memorials may be directed to York College or Know Your Bible.   ​