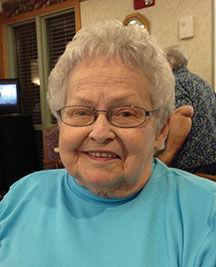 She was born June 1, 1928 in a sod house in Oshkosh to Charles A. and Emma (Schoenleber) Kaliff. On June 5, 1949, Shirley was united in marriage to Orvel G. Holt at the 1st Evangelical Lutheran Church in McCool Jct.

Shirley was a teacher, and enjoyed helping her husband with business at Roger’s Shoe Store, she was curator of the Anna Palmer Museum, and had worked at York Jewelry. She enjoyed crafts of all kinds, decorating, reading, crossword puzzles and sewing. She also loved to travel, enjoyed gardening, and watching History and Hallmark movies on television. Most of all, she loved her family and spending time with them.

A celebration of Shirley’s Life will be held at 2 p.m., Friday, Jan. 23, 2015 at the 1st Evangelical Lutheran Church in York, located at 14th and Delaware. In honoring Shirley’s wishes, she has been cremated. No viewing or visitation. A private family inurnment will be held at a later date at Bethesda Cemetery, Hwy 34 York.

Memorials may be directed to the family for later designation.  ​