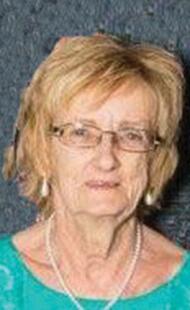 Sharon R. Hiett age 74 of York, died Thursday, Sept. 28, 2017 in York surrounded by her family after a courageous battle with cancer.

She was born Aug. 17, 1943 in Holdrege to Claude E. and Willette (Stoll) Lansden. Sharon grew up in Fairmont where she attended Fairmont High School. She was married to Harold Hiett on Dec. 5, 1961. They were blessed with six children. Sharon was baptized at the First Christian Church in York.

Sharon was a busy homemaker while her children were small, but worked and managed the Country Kitchen in York. Later she furthered her education and received her Licensed Practical Nursing Degree from Southeast Community College. She worked at Midwest Covenant Home, York General Hearthstone, and lastly at the Nebraska Women’s Correction Facility until her retirement in June 2007. She loved mountains, quilting, crocheting, slot machines but most of all family holidays, lake weekends, pumpkin patch parties, Easter Piñatas, and monthly birthday parties. Her greatest joy was her family. Any time spent with family was special and her heart was full.

She was preceded in death by her parents; son, Galen and grandson, Curtis Payton; brother, Ivan Lansden; her step-brothers and sisters, parents-in-law, sisters-in-law, Wilma Bachelor and Sharon Hiett, brothers-in-law, Gary Hiett, and James Thompson.
​
Funeral services are scheduled for 10 a.m., Monday, Oct. 2, 2017 at the First Presbyterian Church in York with the Reverend Dr. Mike Eickhoff and Pastor Curtis Holzworth officiating. Burial will be in York’s Greenwood Cemetery. Visitation will be held from 1-8 p.m. Saturday, Sept. 30, 2017 and from 1-8 p.m. on Sunday with the family greeting friends from 6 – 7:30 p.m. that same evening at the mortuary. Memorials may be directed to the American Cancer Society.