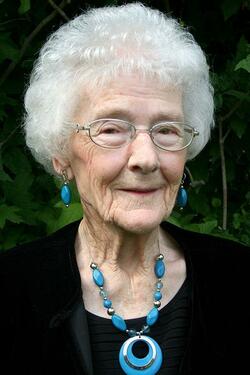 She was born November 12, 1924 to John P. and Elizabeth (Friesen) Siebert at rural Lushton, NE.  On November 19, 1943, Selma was united in marriage to Aaron C. Goertzen at Henderson, NE. To this union five children were born: Ardean, Roger, Doris, Leroy, and Bryan.

Selma will be remembered as a woman full of life and energy. She was an extremely hard worker and devoted her life to taking care of her family and others. Selma loved flowers and gardening, embroidering, and reading.  She enjoyed baking, cooking, and delivering food to others, especially chow mein. Selma was a member of the Henderson Healthcare Auxiliary and a member of Countryside Bible Church, Hampton.

Graveside services will be held at 2:00 PM, Wednesday, December 21, 2016 at Faith Evangelical Bible Cemetery, Henderson. Memorial services will follow at 3:00 PM at Countryside Bible Church, north of the Hampton Exit. Visitation will be held Tuesday from 1PM-9PM, with family greeting friends from 6PM-7:30PM that evening, all at the mortuary in Henderson. Memorials may be directed to Gideons International for Bibles. ​