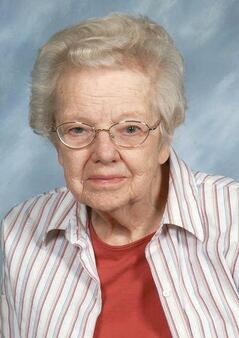 Sadie and Carl Friesen were united in marriage Nov. 1, 1941 at Henderson. Their union was blessed with three children, Karren, LaRhue and Lynette.

Along with taking care of her home and family, Sadie worked as a dental assistant in her husband’s dental office. She was a member of the Bethesda Mennonite Church and an active volunteer in the Henderson area. She was a member of the Henderson Planning Commission and was instrumental in the development of the recycling center in Henderson. Sadie was an avid painter and was always willing to help those in need.

Survivors include her daughter, Karren (Stan) Boehr of Henderson; son, LaRhue (Sheryl) Friesen of Lincoln and daughter, Lynette (Steve) Ratzlaff of Fresno, Calif.; eight grandchildren; and 12 great-grandchildren. Sadie is also survived by a brother, Harland Pankratz of Kearney; three sisters, Cleola Franz of Henderson, Dorthie Goertzen of Denver, Colo. and Allegra (Owen) Gunn of Henderson; numerous nieces, nephews, and friends. Preceding her in death were her parents and husband.

Graveside services will be held at 2 p.m., Saturday, Oct. 11, 2014 at Bethesda Cemetery in Henderson. As per her wishes, Sadie was cremated. Following graveside services everyone is invited to Bethesda Mennonite Church for a luncheon and time of sharing with the family. Memorials may be directed to the Swan Lake Christian Camp, Viborg, S.D.​