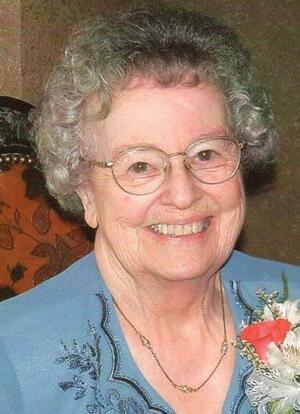 She was born May 9, 1921 in Emerson to John and Florence (DeWitte) Church. Ruth graduated from South Sioux City High School in 1938 and then attended the Central Bible Institute in Springfield, Mo. Following college she was a children’s evangelist for the Assembly of God Church and traveled throughout the country by train to various events. Ruth was united in marriage to Verne  R. Wolstenholm on Oct. 21, 1945 in Lexington. The union was blessed with three children, Nancy, Jean and Ross.

Left to cherish her memory are two daughters, Nancy (William) White of Colorado Springs, Colo. and Jean (Arlen) Ankle of Liberal, Kan. and one son, Ross (Patty) Wolstenholm of York.

Funeral services will be held at 10 a.m. Saturday, Aug. 27, 2016 at the Metz Chapel in York. Interment will be in York’s Greenwood Cemetery. Closed casket visitation will be from 5 - 9 p.m. Friday at the mortuary with the family greeting friends from 6:30 -7:30 p.m. Memorials may be directed to the family for later designation.​