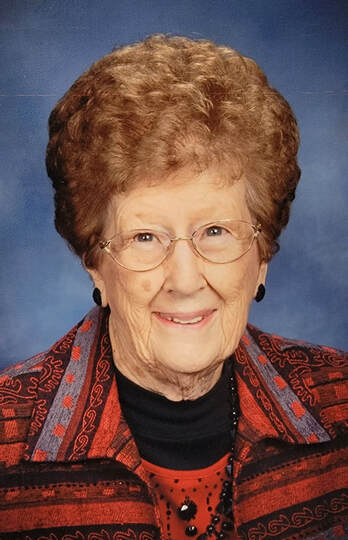 On December 29, 2022, Ruth E. Harrison, age 102 of York, NE was called to eternal rest. Ruth was the second child born to John and Clara (Gaukel) Knipfle in the family home in rural Goehner, NE.  When she was two years old, the family moved to York, NE where she grew up on a farm southeast of York.  She attended country school and York High School before leaving home for work.

Ruth was working as a housekeeper when she and her sister went out on a blind date and Ruth met the love of her life, Denzel Harrison, whom she married on March 29, 1942, in Los Angeles, CA. The happy couple lived in Los Angeles, CA during the World War II war time.  She remembered blackouts nearly every night.  Ruth worked in a war factory that made bomb door hatches for the war planes.

She and Denzel moved back to York in 1944 to farm and eventually bought the farm that would become the family home where she and Denzel welcomed and raised two sons.

When her sons had grown, Ruth worked for 20 years at Hested’s Variety Store, as well as helping her husband on the family farm until his death in 1974.  After his death, Ruth moved to an apartment in town and later managed those apartments until she was 89 years old.  She lived in that same apartment for many years, until she moved to the Hearthstone where she resided until she went to her Eternal home.

Ruth had a passion for the Lord Jesus and was a lifetime member of Emmanuel Lutheran Church. She taught Sunday school for a number of years and also sang in the choir.  Ruth also was a member of LWML, and the York General Hospital Auxiliary. She volunteered at Hearthstone and Meals on Wheels.

Another passion of Ruth’s, besides her family, was playing games, especially cards. She was active many years playing bridge with her friends.  She also enjoyed gardening and everyone in the apartment complex knew which apartment was hers by all the flowers she planted in front.  She will be missed by all her loving neighbors that would gather often outside her front door for lively conversation and time with Ruth at the apartment and by the loving staff at the Hearthstone.

She didn’t know a stranger and loved to visit with everyone, no matter their age.  Mention a name and she could tell you who they were and the family connections. Ruth loved to read and even the loss of her eyesight didn’t diminish her desire for reading. She registered for and received audio books from Commission for the Blind that allowed her to continue her reading passion.

Survivors include: two sons, Rich (Arlene) Harrison of York, NE and Ron (Sandy) Harrison of Ogallala, NE and her grandchildren: Bonnie (Tim) Wiegand of Rochester, NY, Rachel (Hyle) Erwin of Lincoln, NE and Clint Harrison and John Snider of Albuquerque, NM, her step grandchildren: John (Billie) Walker of Ault, CO and Shelby Jones of Lincoln, NE.
She is also survived by her great grandchildren: Eli, Sera, Charlie, “little Hyle”, Rosalyn, Justice,  Corban, and Ryenn, several nieces, nephews, and so many friends that will miss her dearly.

Ruth is preceded in death by her parents, husband, brothers Carl and Bob Knifel and sisters Vera McClain and Irene Utecht.
Memorial Services for Ruth are scheduled for 10:00 a.m., Thursday, January 12, 2023, at York Emmanuel Lutheran Church with the Reverend Ben Kaiser officiating. Inurnment will follow at Greenwood Cemetery in York. Cremation, no viewing or visitation.  Memorials may be directed to Emmanuel Lutheran Church, School, or Lutheran Hour.