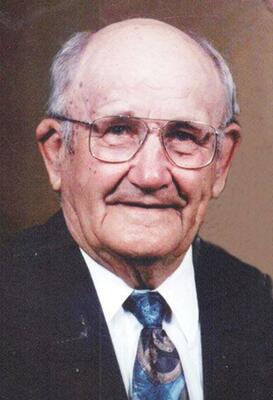 He was born May 31, 1926 in rural Hamilton County to Dietrick K. and Anna (Siebert) Friesen. Ruben and Lorene A. Kroeker were united in marriage on Dec. 6, 1950 at Henderson. The union was blessed with four daughters: Joyce, Dorothy, Kathy and Joann. Ruben was a lifelong farmer in Hamilton County. He was a member of the Bethesda Mennonite Church in Henderson. Ruben and Lorene loved to travel and had visited Canada and all 50 states. Family was important to Ruben and he enjoyed being surrounded by his children, grandchildren and great-grandchildren.

Left to cherish his memory are his wife of 66 years, Lorene of Henderson; four daughters, Joyce and husband Ron Janzen of rural York, Dorothy and husband Tim Robbins of Omaha, Kathy and husband Don Weedin of Hampton and Joann and husband Wayne Kalvoda of Glenvil. Grandchildren include, Andrew Janzen, wife Amy and their children Dylan and Alyssa of Hastings, Jennifer Janzen of Lincoln, Rebecca, husband Kevin Schultz and their son Luke of Henderson, Anne Marie Robbins of Omaha, Katie and husband Matthew Case of Omaha, Michael Robbins, wife Whitney and their daughter Evan of Omaha, Lisa, husband Micah Crosley and their daughters Savannah and Ellie of Salina, Kan., Jason Weedin, wife Lindsey and their children Theo and Asher of Lincoln, Ryan Weedin, wife Melissa and their children MaKenna and Joshua of Hampton and Zachary Kalvoda and Kaylee Kalvoda of Glenvil. Ruben is also survived by a brother, Albert D. Friesen of Henderson; brother-in-law, Marvin L. Kroeker of Moorehead, MS; nieces, nephews, other family and friends.

Preceding him in death are his parents; two sisters, Emma Epp and Esther Friesen and a granddaughter, Taylor Kalvoda.

Graveside services will be held at 1:15 p.m. on Friday, Dec. 23, 2016 at the Bethesda Cemetery in Henderson. Memorial services will follow at 2 p.m. at the Bethesda Mennonite Church in Henderson with the Reverend Jim Voth officiating. Visitation will be Wednesday from 5-9 p.m. and Thursday from 9 a.m. - 9 p.m. at Metz Mortuary in Henderson. The family will be present to greet friends from 6:30 - 8 p.m. Thursday evening. Memorials may be directed to the MCC Canner.​