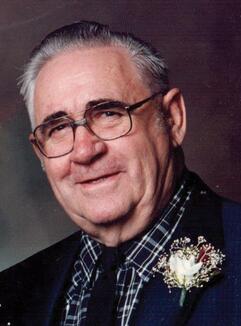 Roy left the family farm in 1949 when he and Gladys married. Roy was a master carpenter working first for O.L. Clarke & Sons and then Batterton Home Improvement. He was especially proud of working as a guard at the Grand Island Ordinance Plant for over a year.

After retiring from Batterton, Roy started his own carpentry business. Once Roy decided to hang up his hammer, he worked for the York County Roads Department until officially retiring, for good.   And of course, as a father of five daughters, he spent many of his spare hours working on their cars and eventually their homes.

Roy loved music and shared this love with family and friends. He was a popular local musician, frequently playing his guitar and singing his favorite country songs at area taverns and bars.

Funeral services are scheduled for 2 p.m., Wednesday, March 18, 2015 at Metz Chapel with the Reverend Matthew Mau officiating. Burial will follow at Waco Cemetery in Waco. Visitation will begin Monday after 5 p.m., with family greeting friends Tuesday evening from 6 to 7:30 p.m. at the mortuary. Memorials may be directed to the family for later designation.​​