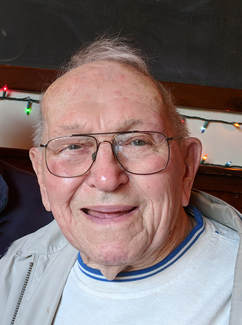 Roy worked at Consumers Public Power District, later Nebraska Public Power District, in O’Neill, Norfolk, Columbus and York from 1947 – 1987, retiring as Division Manager, Transmission & Distribution Operations. He was a life member of the Institute of Electrical and Electronics Engineers, and the National Society of Professional Engineers. He was an active member of Emmanuel Lutheran Church in York, York Noon Sertoma and the American Legion Bolton Post #19. He was an avid reader and loved fly fishing and camping. He also enjoyed his daily coffee group.

He is survived by his wife Bonnie J. Berner of York, daughter Suzie (John) Ellis of York, and granddaughter Annie Ellis (Fidel Matos) of Lincoln. He is also survived by brothers-in-law Lloyd Seger of Yankton, SD and Raymond (Janice) Harmon of O’Neill; sisters-in-law Lois Vorce of O’Neill and Ann Harmon of Grand Island, NE; and many nieces and nephews.

He was preceded in death by his parents and sister Muriel Seger.


Condolences may be left for the family at www.metzmortuary.com. Metz Mortuary in York is handling arrangements.