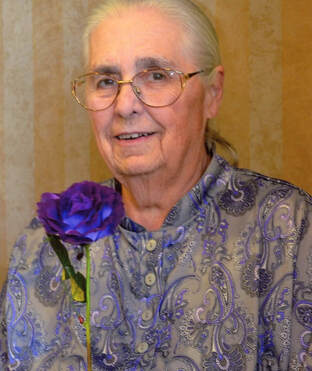 Roberta Faye "Bobbie" Howser Warner aged 79 went home to be with the Lord Saturday, December 29, 2018 at Midwest Covenant Home in Stromsburg, Nebraska after a long battle with Alzheimer's. She was born July 8, 1939 in David City, Nebraska the oldest daughter of Keith R. and Leora Fay (Fox) Howser.

She married Howard W. Warner on April 4, 1957 and they celebrated their 53rd Wedding Anniversary just prior to Howard's death in 2010.

Bobbie was a member of the Bradshaw United Methodist Church for more than 30 years serving as a Sunday School Teacher and Superintendent for many years.

Bobbie was employed by Martin Luther Home for 4 ½ years and went on to serve as a corrections officer for the Nebraska Center for Women in York for more than 16 years. She was commissioned an Admiral in the Great Navy of the State of Nebraska by Governor Benjamin Nelson in 1998 and re-commissioned by Governor Mike Johanns on May 22, 2004.

She enjoyed gardening, reading, embroidering, sewing, serving in her Church and most of all spending time with her family. She was happiest when the children, grandchildren and great grandchildren were visiting. She taught generations of children to cook and sew, clean and bake, and tend the garden with patience and an amazing sense of humor.

Bobbie was preceded in death by her husband of 53 years, parents, one brother Nolan Howser, and one beloved grandson Jason Howard Haack.

Funeral services will be held 10:00 AM, Friday, January 4, 2019 at the Bradshaw United Methodist Church with the Reverend Michelle Reed officiating. Burial will follow at the Plainfield Cemetery, Bradshaw. Visitation will be held from 1:00 – 8:00 PM Thursday with the family greeting friends from 6:00 – 8:00 PM that same evening at the mortuary. Memorials may be directed to the family for later designation.