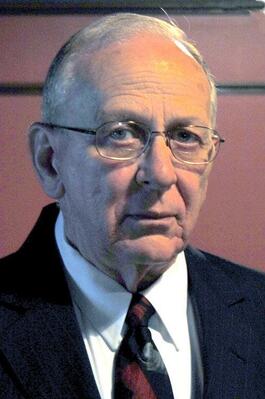 Funeral services will be held at 2 p.m., Friday, Feb. 13 at the Metz Chapel in York, with the Rev. Stan Davis officiating. Visitation will be one hour prior to the service. Interment will follow in the Exeter Cemetery in Exeter.

Robert was a graduate of Benedict High School. He attended York College, received his Bachelor’s Degree from Wesleyan University in Lincoln, Master’s from the University of Nebraska and Specialist in Education from the University of Nebraska. Robert was a lifelong school administrator, serving as superintendent of schools in Monroe, Clarkson and Wausa until his retirement in 2000.  Robert was a widely respected administrator and was often called upon to consult with other school districts, as well as with the State of Nebraska. He also served as County Superintendent of Schools for Knox County.

In addition to being an administrator, Robert was deeply involved in the day to day education of the students in his schools. From attending all school functions, to eating lunch with the Kindergarten students in Wausa, he thoroughly loved his job.

Robert was deeply committed to his family. He was always there for all of his children and grand-children. No matter what, he was a supporting father and grandfather.  Robert was always at his happiest when family was around and took the role of “grandpa” seriously. He also enjoyed model railroading, tinkering around his house and coffee-time with his friends.

Robert was preceded in death by his wife, Luene; his brother, John (Jack) and his parents, Rupert and Nellie.​