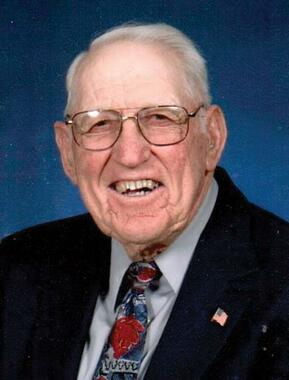 He was born on June 4, 1927, on the family farm near Thayer to Frank and Florence (Walstrom) Liedtke. Bob lived on this farm homesteaded by his great-grandfather in 1872 for the majority of his life. He graduated from Thayer High School in 1944. He served in the U.S. Navy during WWII from December of 1943 through March of 1946 and then again during the Korean Conflict from September of 1952 through November of 1953. Bob was on the first Nebraska Honor Flight to Washington, DC.

On Dec. 27, 1952, Bob was united in marriage to Melba Wittmack at Zion Lutheran Church in Shickley.  He was a lifelong farmer in the Thayer/Gresham area. Farming was his passion and hobby. He enjoyed traveling, playing cards and watching Husker sports. Bob was a longtime member of St. Peter Lutheran Church in Gresham and the American Legion Post #13 in Gresham.

Funeral services will be held at 10:30 a.m. on Thursday, Dec. 3, 2015 at St. Peter Lutheran Church in Gresham with Pastor Lee Seetin officiating.  Graveside services with military honors will be at 1:30 p.m. Thursday at York’s Greenwood Cemetery.

Visitation will be from 5-9 p.m. Tuesday and from 9 a.m. - 9 p.m. Wednesday at the mortuary. The family will receive friends Wednesday evening from 6:30-8 p.m. Memorials may be directed to the family for later designation.​​