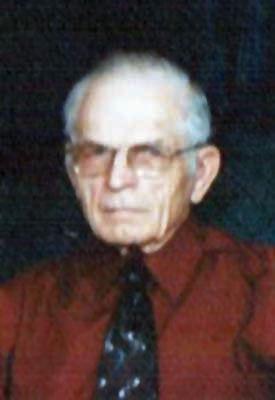 He was born on Aug. 10, 1931in Holt County to Frank F. and Agatha (Harder) Friesen. During his elementary years the family moved to a farm northwest of Aurora. When he was in high school the family moved north of Henderson and he attended Henderson High where he met his sweetheart Jennie Huebert. He graduated at age 16. He enjoyed driving his Model A coupe and often said that the only good working part was the horn which he enjoyed honking when he drove past his future father-in-law’s home after curfew. He was baptized on June 5, 1949, by the Rev. Arnold Nickel.

Dad participated in Voluntary Service and 1W service in Topeka, Kan. He also worked in a filling station and a used bookstore to earn money for his wedding. Robert and Jennie were married on Aug. 14, 1953, at Bethesda Mennonite Church by the Rev. Arthur Isaak. After service they moved onto a farm south of Aurora. They enjoyed living there until they moved to a farm 10 miles west of Henderson on Feb. 15, 1956, the day their eldest was born. All four children were born and raised during the 38 years Mom and Dad lived on that farm. He enjoyed going on mission trips to help after natural disasters and helping others shingle their homes and put up bins.

Robert and Jennie retired and moved to their home in Henderson in December of 1993, with their farm sale on the coldest day in January, 1994. During the summer Roberty golfed every day, until he made a hole-in-one, and then decided to find a job. He installed underground sprinklers until he had to move to the Henderson Care Center. The highlights of his retirement years included a service trip to Guatemala, a fruit drying service trip in California and a cousin reunion in Oregon.

He was preceded in death by his parents; his parents-in-law, Henry H. Huebert and Anna Friesen Huebert and step-mother-in-law, Kathryn Peters Huebert; brothers, Ralph, Walt and Don; in-laws, Harvey Huebert, Adeline Huebert, Leo and DeLorris Huebert, Milton Huebert, Lester Huebert, Darlene and Bud Steingard and Tom Dick; nephews, Stan Braun, Weston Friesen, Lauren Huebert, Ron Huebert, and Lynn Huebert. Also deceased, sister-in-law, Martha Friesen who passed away shortly after Robert.
​
Graveside service will be held 9:30 a.m., Wednesday, Oct. 28, 2015 at the Bethesda Mennonite Cemetery followed by a Memorial service at 10:30 a.m. at Bethesda Mennonite Church. Memorials may be directed to the MCC Canner or MCC. Visitation at the mortuary in Henderson will be from 3 - 9 p.m. Monday and from 9 a.m. - 9 p.m. Tuesday with his family greeting friends from 7 - 9 p.m. Tuesday evening.