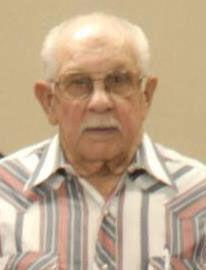 He was born Dec. 6, 1927 at McCool Jct. to Ivor and Ethel (Schoch) Bellows. Robert was united in marriage to Jeannette Buerkle on April 27, 1952 at Plainview. The union was blessed with seven children. Robert was a carpenter and had worked for Zieg Construction, B & B Construction and Champion Homes.

He was a member of the McCool Jct. Volunteer Fire Department. He loved gardening and every summer had plenty of produce to share with family and friends. Robert also enjoyed making wooden toys, many of which are prized possessions of his family.

He was preceded in death by his parents; wife; daughter, Jeanne; brother, Delvin and two sisters, Virginia Cudaback and Janice Browell.

Funeral services will be held at 2 p.m. Friday, March 20, 2015 at the Metz Chapel in York with the Reverend Art Phillips officiating. Interment will be in York’s Greenwood Cemetery.

Visitation will be from 5-9 p.m. Wednesday and 9 a.m. - 9 p.m. Thursday at the mortuary with the family greeting friends from 7-8 p.m. Thursday.  Memorials may be directed to the family for later designation.​