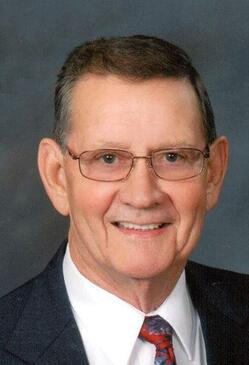 Richard had served in the Army from January 1955 to January 1958 with the 82nd Airborne Division. On Aug. 20, 1955, Richard was united in marriage to Annaliese W. Blocher at St. Ann’s Catholic Church in Lexington.

After they were married, they lived at Fort Bragg while in the military. They then moved back to Nebraska where he worked for Sears. He was then transferred to Joplin, Mo. where he worked at Sears for the next year. He then went to St. John’s Regional Medical Center where he was employed as Director of Environmental Services.

After eleven years they returned to Nebraska due to his mother’s declining health. Richard went to work for Centennial High School as director of building and grounds. He was a member of St. Joseph Catholic Church in York since 1979. He was also a participant in the Knights of Columbus. He enjoyed fishing and camping with his family. He enjoyed music and barbershop singing.  Richard loved working with his hands and was an excellent handyman.

He is survived by his wife Annaliese of Fairmont; children, Debbie (Ron) Makovicka of York, Patricia (Dwight) DeBusk of Riverton, Kan., Denise (Gale) Naber of Waco, Douglas (Lois) McCall of Joplin, Mo. and Pamela (Mike) Brackhan of York. He is survived by 22 grandchildren and 20 great- grandchildren with five more blessings on the way.

A Mass of Christian Burial will be held at 2 p.m. Tuesday, May 3, 2016 at St. Joseph Catholic Church. Burial with military services will follow at St. Joseph Cemetery, York.