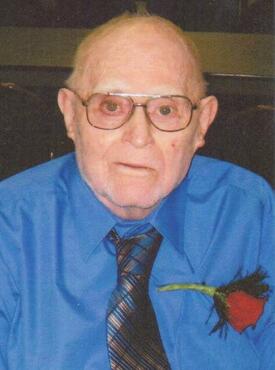 He was born March 16, 1924 at Bellwood, NE to Fred and Emma (Klein) Eickmeier. Richard and Eleanor Gabel were united in marriage on June 26, 1952 at Sacred Heart Catholic Church in Shelby, NE.

Richard farmed in the York County area and was a Northrup King Seed dealer as well. He enjoyed gardening, attending auctions, and listening to music.  Richard was great at fixing things and was always on the lookout for fix-it projects.  He was a member of St. Joseph Catholic Church in York.

He is survived by his wife Eleanor, nieces, nephews and a host of friends.  Preceding him in death were his parents and his brother Harley.

A Mass of Christian Burial will be held at 10 a.m., Tuesday, May 12, 2015 at St. Joseph Catholic Church in York with the Reverend Monsignor James Reinert officiating. Interment will be in St. Joseph Cemetery, York.  A Rosary service will be held at 7 p.m. Monday evening at the church with the family greeting friends following the Rosary. Visitation will be from 1-9pm Sunday and 9am-4 pm Monday at the mortuary. Memorials may be directed to St. Joseph Catholic Church or school.
​
Condolences may be emailed to Metz Mortuary Messages will be given to the family.