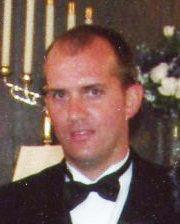 He was born Feb. 21, 1974 in York to Thomas and Kathy (Liegl) Boyes. As a boy, Rich served as an altar boy at St. Joseph Catholic Church and achieved a high rank in Webelos Boy Scouts. Later he attended Southeast Community College and UNL. Rich was a veteran of the US Navy. He worked as an engineering consultant for Black and Veatch. He enjoyed sports of all kinds and loved spending time with his nieces and nephews.

Rich is survived by his mother, Kathy Boyes and step-father, Gene Fischer of Fairmont; father, Tom Boyes of York; sister, Jenny West and her children Makenna and Kynsley of York; brother, Tony Boyes, wife Stephanie and their children Katelyn, Ethan and Brayden of Lincoln; grandmother, Betty Black of Central City and aunts, uncles and cousins.

Preceding him in death were two grandfathers and one grandmother.

Memorial services will be held at 2 p.m. on Monday, Feb. 29, 2016 at the Metz Chapel in York. Inurnment will be in York’s Greenwood Cemetery. Cremation, no viewing or visitation.    ​