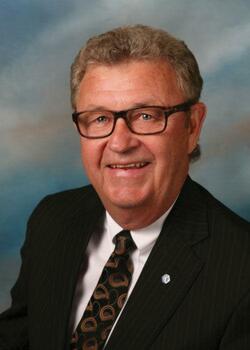 He was born Jan. 14, 1954 in Kearney to Emery and Kathleen (Velene) Shelden. Randy was the Executive Vice President, Chief Information Officer and Correspondent Banker at Cornerstone Bank in York from 1976 to present. He served on several committees for the Nebraska Banker’s Association as well as the American Banker’s Association.

He also has been a long time member of the York Chamber Ambassadors. He enjoyed playing golf and supporting the Nebraska Cornhusker’s football and basketball teams. A great source of joy for Randy was his family, especially his grandchildren. He was a member of the York Optimist Club, and was the Chairman of the Finance Committee for the First United Methodist Church, where he was an active member. He was united in marriage to Barbara Moomey on May 17, 1974 in Kearney. Three daughters were born to the union.

Randy is survived by his wife, Barbara of York; daughters, Megan (Ben) Fago of Hastings, Miranda (Aaron) Golliday of Omaha and Maura (Mike Sciarrotta) of Colorado Springs, Colo.; seven grandchildren, Paul, Lucy and William Fago of Hastings, Emery, Effie and Shelden Golliday of Omaha, and Henzie Sciarrotta of Colorado Springs, Colo. He is also survived by two sisters, Connie (Dan) Simons of Kearney and Marsha Norvell of Papillion; mother, Kathleen Jestes of Kearney; cousins, nieces, nephews and a host of friends. Randy was preceded in death by his father, and stepfather.

Funeral services will be held at 2 p.m. Monday, Nov. 30, 2015 at First United Methodist Church in York with the Reverend Art Phillips officiating. Interment will follow in York’s Greenwood Cemetery. Closed casket visitation will be from 1-9 p.m. Saturday and from 1-4 p.m. Sunday at Metz Mortuary. Sunday evening visitation with the family present will be held from 6:30-8 p.m. at First United Methodist Church.

In lieu of flowers and plants, memorials may be directed to the First United Methodist Church or the York Community Foundation.​