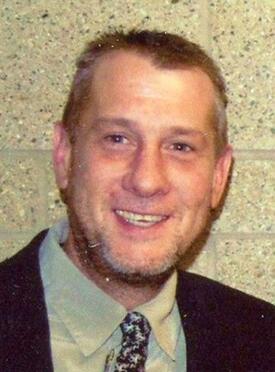 He was born July 5, 1974 to Randall L. and Patricia (Monson) Jones in Lincoln. His childhood was spent in York where he graduated in 1992 from York High School. He then earned his Associates degree in Business from Southeast Community College of Lincoln. He was married to Shannon Neville at St. Joseph’s Catholic Church in York on April 24, 1998. This union was blessed by a son, Braden and a daughter, Katelyn both of Lincoln.

Randy so enjoyed his children, attending their sporting events. Brady’s football meant a lot to him and Kate’s soccer games. He cherished deer season. He and Shannon were a team, hunting every season together since the age of sixteen. He loved the outdoors whether it be hunting, fishing, or just a walk on the river. He loved sharing this special gift and talent not only with his own children and family, but with friends and strangers alike.

He is survived by his wife, Shannon of Lincoln and their children, Braden and Katelyn of Lincoln and his long time hunting Labrador, Deacon Gunner. He is also survived by his father Randall L.(Rosemary) Jones of Lincoln; sister Kristi (Blake) Staehr of Orlando, Fla.; brother, Kenneth Jones of Lincoln; mother-in-law, Susan Neville of McCool Junction; brothers-in-law, Jason Neville of McCool Junction and Timothy Neville of Omaha, as well as many nieces, nephews and other relatives.
Randall J. is preceded in death by his mother and father-in-law, Don Neville.

A Mass of Christian Burial is scheduled for 10 a.m., Saturday, March 25, 2017 at St. Joseph Catholic Church in York, with Father Hunt officiating. Burial will follow at McCool Cemetery, northwest of McCool Junction. A Rosary will be said 6:30 p.m. Friday evening at Metz Chapel in York. Visitation will be held between noon and 8 p.m. Thursday and from 9 a.m. – 8 p.m. on Friday. Memorials may be directed to the family for later designation.
​
Condolences may be emailed to Metz Mortuary Messages will be given to the family.