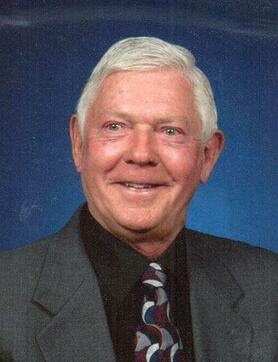 He attended school in St. Bernard after which he worked on the family farm until he enlisted in the Army on April 20, 1953. He spent most of his time in Germany during the Korean War. He was discharged on April 9, 1955. He married Betty Werner on Aug. 1, 1956 at St. Francis Catholic Church in Humphrey. To this union was born six children and they were blessed with 60 years of marriage.

They lived near St. Bernard on the farm for two years and then farmed near Waterloo, Iowa for one year. When they moved back to Nebraska, Ralph opened a furniture and appliance store in Columbus. Later he worked for General Telephone Co. selling yellow page ads in Lincoln. In 1970, he purchased Trade and Transactions, an advertising shopper in York, which he ran until the time the newspaper was sold in 1997. Ralph has been retired since then.

Ralph has been an active member of St. Joseph Church in York, serving as an acolyte. Ralph was a member of the Ambassadors in York Chamber, as well as, many other community affairs. Ralph was always a hard worker, enjoyed yard work, gardening, spending time with family and friends, as well as, wintering in Mesa, Ariz.

He was preceded in death by his parents; Lawrence and Dorothy Pfeifer.

A Mass of Christian Burial will be held at 10 a.m., Saturday, March 18, 2017 at St. Joseph Catholic Church in York with the Reverend Monsignor Reinert officiating. Ralph will be donating his body to the State Anatomical Board of Nebraska, for medical research and education, following services. A rosary will be said at 6:30 p.m., Friday, March 17, 2017 at Metz Chapel. Family will greet friends one hour prior to the rosary. Visitation will be held on Friday from 1-8 p.m. Memorials may be directed to The Association for Frontotemporal Degeneration (AFTD) or to the family for later designation.
​
Condolences may be emailed to Metz Mortuary Messages will be given to the family.