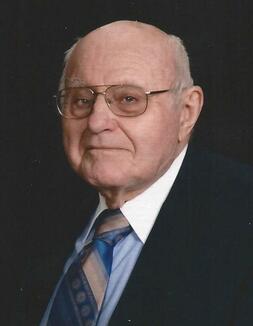 Ralph attended Saint John’s Lutheran School, the north school, through the eighth grade, at which time he worked on the family farm until he was drafted into the United States Army in 1942.

The whole Division saw its First World War II action in Gela, Sicily during Operation Husky in July 1943. They landed in Normandy on June 9, 1944 and secured the areas from Normandy to Cherbourg and Brest. The Division was at the Roer River when the 2nd fought the German Fifth Panzer Army in the Battle of the Bulge.

Ralph was proud of his military service and often talked about his adventures as a tank driver. He had many close calls but never received a scratch. One of his famous sayings was “this old boy has been around”.

He farmed after returning from the war in rural Waco until he retired at the age of 80.

He is survived by his sons Michael J. Naber of Molalla, Ore. and Larry L. Naber and wife Judy of Ankeny, Iowa; grandchildren and great-grandchildren.

Ralph was preceded in death by his parents, Oscar and Maria Naber; his loving wife, Lorraine Naber and infant daughter that died at birth; brothers, Erwin Naber, Virgil Naber, and granddaughter Michele Naber.

Memorial services will be held at 10 a.m., Thursday, Dec. 18, 2014 at St. John Lutheran Church south of Waco. Inurnment with military honors will be in the church cemetery.  Memorials may be directed to the Orphan Grain Train or American Legion Post #49.​
Condolences may be emailed to Metz Mortuary Messages will be given to the family.