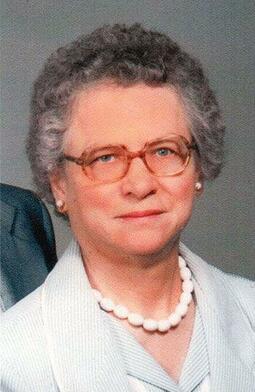 She left this earthly life on June 27, 2016 at the Henderson Care Center in Henderson.

After Attending “Country School” in elementary years, Rachel attended and graduated from Henderson High School in May 1946. Her baptism by Rev A.W. Friesen occurred in May of 1946 at the Bethesda Mennonite Church, where she was a life-long member, and in earlier years was active in the church life.

On Sept. 7, 1947 Rachel and Harry Hiebner were married at the Bethesda Mennonite Church. They enjoyed traveling to see family. Harry and Rachel were blessed with four sons: Lauren, Arlin, Brian, and Lyndon. Her role as a mother was important to her.

Rachel worked for 30 years at the Henderson Hospital and Care Center as a nurse’s aide and Care Staff Member. She was known for her caring spirit, and her ability to play piano. Even after she became a resident, she volunteered in activities and played the piano as a gift to others. She also played scrabble until the last week of her life. Rachel’s interest in family and heritage led to her work on Boehr and Hiebner genealogies. She also kept scrap books with pictures and articles about family members. She enjoyed hosting her family, especially on holidays.

After Harry’s death in May 1996 Rachel lived at home for 13 years, then moved to the Midtown Manor for 1 ½ years, until moving to the Care Center in 2010. She enjoyed her time at both places, and received excellent and loving care.

Funeral services will be held at 10:30 a.m. on Friday, July 1, 2016 at the Bethesda Mennonite Church in Henderson with Pastor Jim Voth officiating. Interment will be held at the Bethesda Mennonite Cemetery following services at the church. Visitation will be held from 1 – 9 p.m. on Wednesday and from 9 a.m. – 9 p.m. on Thursday with the family greeting friends from 6 – 8 p.m. Thursday evening at the Mortuary in Henderson. Memorials are suggested to the Henderson Care Center.​