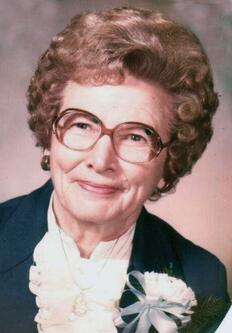 Phyllis (Hotchkiss) Hankel was born at Osceola on Feb. 10, 1921 to Hubert and Mabel (Jones) Hotchkiss.

She went to her heavenly home on July 12, 2015 at York. She was baptized at Salem Lutheran Church in Stromsburg and confirmed her faith at Zion Lutheran Church in Benedict. Phyllis attended two rural Polk County schools and then entered Benedict Consolidated School in the 3rd grade. She graduated from Benedict High School in 1939. She was the last surviving member of the class, living just eight days longer than her classmate.

After graduation, she worked in the Stromsburg Variety Store and as secretary for Walter French, Superintendent of Stromsburg Public Schools. She married Harry Hankel on Dec. 3, 1942, at Utica while he was home on a 3-day pass. She accompanied her new husband to military bases in Kansas, Nevada, and Louisiana before returning home, when he was sent overseas.

While waiting, she returned to her job at Stromsburg Public Schools. When Harry was discharged from the Army, they farmed near Utica until 1954. When they moved to York, Harry started a television repair business. In 1961, they returned to the farm, this time near Benedict, where they lived until they retired to York in 1984.

Phyllis was active in the communities she lived in. She was a long time active member of Emmanuel Lutheran Church in York, and made countless quilts with their World Relief group. She was a 4-H leader, Boy Scout leader, and Sunday school teacher. She was a member of the American Legion Auxiliary and of the MUM Home Extension Club, and was active in Extension on the County and State levels.

Phyllis enjoyed gardening and yard work and also working alongside Harry on the farm. She was especially proud of her flowers, growing and appreciating them her whole life. Her family was very important to her: children, grandchildren, and great-grandchildren. Whenever possible they were there to support children and grandchildren at activities and events in their lives.

Left to cherish her memory are son, Richard (Kathy) Hankel of York and daughter, Karen Anderson of Rosemount, Minn.; five grandchildren, Jody (Ryan) Church and Jeff (Katie) Hankel both of Gardner, Kan., John (Mya) Hankel of Omaha, Brian (Kelsey) Anderson of El Paso, Texas and Jason Anderson of Fayetteville, N.C.; five great-grandchildren, Ashley and Erin Hankel of Omaha and Natalie and Megan Church and Elijah Hankel of Gardner, Kan. She is also survived by sisters, Doris Brehm of Lincoln and Pat (Eldon) James of Elkhorn as well as many cousins, nieces and nephews.

Services will be held at 10 a.m. on Saturday, July 18, 2015 at Emmanuel Lutheran Church in York. Live video streaming will be available at www.emmanuelyork.org. Burial will follow at Greenwood Cemetery, York. Visitation will be held at Metz Mortuary from 1-9 p.m. Thursday and from 9 a.m. – 9 p.m. on Friday with family greeting friends from 6 – 8 p.m. that evening. Memorials may be directed to family for later designation.​