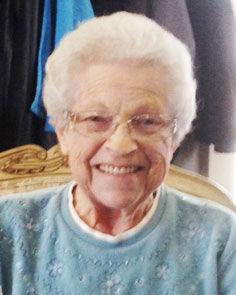 Pauline Irma Smith age 82 of York, died Saturday, Oct. 11, 2014 at York. She was born Dec. 7, 1931 at York to Gothard “Ole” and Martha (Lundgren) Nelson. Pauline was a longtime member of the First Evangelical Lutheran Church, York Eagles and the York Elk’s Auxiliary. On May 30, 1965 she was married to Donald Ray Smith in Las Vegas, Nev.

She is survived by her children, Linda Bishop of David City, former son-in-law, Steve Bishop of Peabody, Kan., Becky (Roger Slapnicka) Nelson of Geneva and Donna (Don) Ellis of York.

Great-grandchildren include Ray and Murphy DeBrie, PJ and Amerikus Slapnicka, Cody and Kayla Partridge and Theodore Martinez and Myles Seely.

Pauline made her career as a cook. She was employed by many establishments in York. She was an avid Husker football and volleyball fan. Her greatest joys were spending time with her family and taking care of babies, young and old. She will be deeply missed by all of those whose hearts she touched.

Funeral services are scheduled for 2 p.m., Wednesday at the First Evangelical Lutheran Church in York with burial in York’s Greenwood Cemetery. Visitation began Monday evening and continues Tuesday from 9 a.m. – 9 p.m. with her family greeting friends later that night from 6:30 - 8 p.m. at the mortuary. Memorials may be directed to her family for later designation. ​