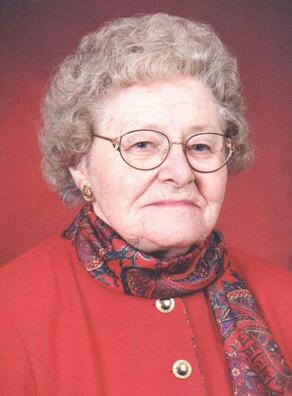 Olga Margaret Penner Peters of Henderson died peacefully on Wednesday, May 6, 2015. She attained the age of 102 years, 10 months and 7 days.

She lived in Munich until her early teens when her family moved to Henderson. She completed eighth grade and attended one year of German High School. She was baptized into the membership of the Bethesda Mennonite Church on May 16, 1932 and remained a faithful member until her death.

Olga married Abe R Peters on May 9, 1937. The Rev A W Friesen officiated their marriage. To this union were born five children: Myron of Hampton, Ardean of York, Maurine of Asheville, N.C., Lila of Wallace and Harris of Hampton. Abe and Olga shared 49 years and 11 months of marriage together. They lived on the farm until Abe and his brother, Clarence, bought Midwest Irrigation. They then moved into Henderson in 1958. Mom’s world changed dramatically when they moved. He traveled extensively and she took on the responsibility of being a primary caregiver for the three children remaining at home.

She was preceded in death by her husband Abe; her parents, her brother Jake and his wife, Mathilda; her sister Marie Regier and her husband Art; her son, Ardean; her son-in-law Harold  Lee; and a great-grandchild, Tynan Koop.; her in-laws Alfred and Marie Peters, John and Elizabeth Peters, Rein and Lilly and his second wife Helen, Arnold and Lenora, and Clarence and Martha and his second wife, Goldie.

The family is grateful for the wonderful care Mom received at Rosewood Court, Henderson Care Center, and Asera Care.  Mom loved the many visits she got from her family and friends.

Memorials in her name may be given to the Mennonite Central Committee or the Anabaptist Mennonite Biblical Seminary (AMBS).  The family is grateful for the many acts of kindness and heartfelt condolences that we’ve received.

Graveside services will be held at 10:15 a.m., Monday, May 11, 2015 at Bethesda Cemetery, Henderson followed  by a memorial service at 11 a.m., at Bethesda Mennonite Church. Visitation will be from 1-9 p.m., Saturday and Sunday, at Metz Mortuary in Henderson.  The family will be present to greet friends from 6-8 p.m., Sunday evening.  ​