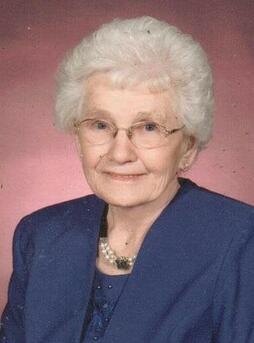 She was born on Aug. 17, 1925 in Henderson to William and Marie Siebert (Siebert). On April 27, 1944 Norma married Walter A. Friesen in Henderson, and to them four children were born, Wally, Twila, Nyla and Dianne. She was a member of the Bethesda Mennonite Church and enjoyed gardening, tending her flowers, sewing and baking. She was a past president of the Hospital Auxiliary, Mission Circle, Flower Club and was the Nebraska MCC Canner Chairman.

Norma is survived by her children, Wally (Shirley) Friesen of Henderson, Twila (Lloyd) Nickels of Hampton, Nyla Friesen of Newton, Kan. and Dianne Wall of Columbus along with nine grandchildren and 14 great-grandchildren. She is also survived by her sisters, Elvera Huebert of Henderson, Ardena Regier of Ogallala, Alvina Hofer of Bridgewater, S.D., Lois (Roger) Kroeker of Las Vegas, Nev. and sister-in-law Marie Epp of Henderson.

Norma is preceded in death by her parents, husband and her granddaughter Angela.

Graveside services will be held 9:15 a.m. Friday April 29, 2016 at the Bethesda Mennonite Cemetery, with Memorial services following at 10 a.m. at Bethesda Mennonite Church, with Pastor Jim Voth officiating. Visitation will be held from 1 – 9 p.m. Wednesday and from 9 a.m. – 9 p.m. Thursday with family greeting friends from 7 – 8:30 p.m. at the Mortuary in Henderson.

Memorials are suggested to the MCC Canner, or to the Bethesda Sound System.​