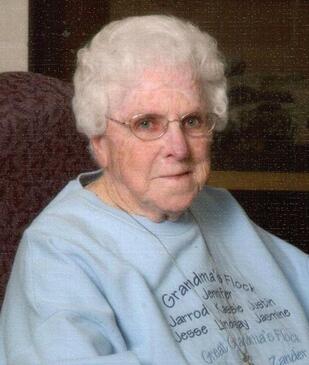 She was born May 21, 1930 in York to Roy and Stella (Richardson) Nickels. She graduated from Bradshaw High School in 1947 and was united in marriage to Richard O. Thompson on Sept. 16, 1952 at York. Nora had worked at the egg plant in York, the greeting card department of the Pamida Store, and provided daycare in her home as well.

She collected dolls, chickens and was a huge John Wayne fan. She was also a foster grandparent. Nora was devoted to her family and was extremely proud of them and all their accomplishments.

Funeral services will be held at 11 a.m., Friday, Nov. 27, 2015 at the First United Methodist Church in York with the Reverend Art Phillips officiating. Interment will be in the Plainfield Cemetery west of Bradshaw. There will be no viewing or visitation. The family has requested that casual attire be worn to the funeral service. In lieu of flowers and plants, memorials may be directed to the family for later designation. ​