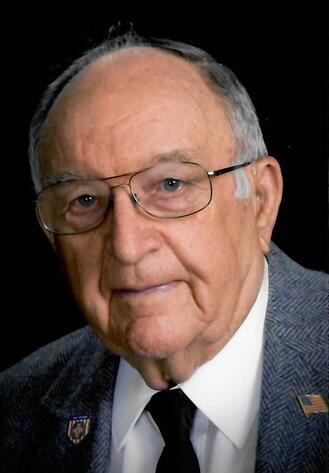 ​Noel Edward Kealiher, 96, of York, NE died Friday, July 22, 2022 at York General Hospital. He was born December 14, 1925 to Moses Howard Kealiher and Mabel (Graves) Kealiher of rural Polk, NE.  He attended grade school #66 in York County and graduated from Polk High School in 1943.  After graduation he served two years in the U.S. Army during World War II in the European Theater of Operations, earning two Bronze Battle Stars for battles on the Rhineland and Central Europe.
On December 15, 1947 he was united in marriage to Geraldine Rose Miller.  After her death in January, 1989, he married Virginia Bjerrum on September 19, 1998.

He enjoyed hunting, fishing, dancing, playing cards, coin collecting and time with family.  He loved to travel and visited every state except Maine and all continents except Africa and South America.  He especially enjoyed his trips to Russia, Australia, New Zealand, Ireland and his trip with his new bride to China.

Those left to cherish his memory are his wife, Virginia of York, one son, Gerald (Kristin) of Polk; four daughters, Carolyn (Larry) Johnson of Grand Island, Mary Lou Fossberg of Lincoln, Nancy (Tom) Mundt of Bradshaw, and Jane (Kevin) Goertzen of Lincoln; 13 grandchildren, 23 great grandchildren and 4 great great grandchildren.  He is also survived by his brother Gail Kealiher of Denver, CO; 3 step children, Vicki Recknor of Wellington, CO, Gary Bjerrum of Mitchell, SD and Dennis (Sheila) Bjerrum of Bradshaw; 10 step grandchildren and 15 step great grandchildren; other relatives and a host of friends.  He was preceded in death by his first wife, his parents, 3 brothers, 5 sisters, other relatives and many friends.

Funeral services are scheduled for 10:00 am, Wednesday, July 27, 2022 at the First United Methodist Church in York. Burial with military honors will follow at Arborville Cemetery, Polk. Visitation will be held on Tuesday from 1-8 pm, with his family greeting friends from 6-7:30 pm that evening at the mortuary. Memorials may be directed to the family.
​
Condolences may be emailed to Metz Mortuary Messages will be given to the family.
Find our featured Mortuary in Family Services, Funeral Services and Grievance Services featured as a York, Nebraska Business in York Marketplace.
Location: Metz Mortuary | 109 South Lincoln Ave | York, Nebraska 68467 | Phone: 402-362-3351