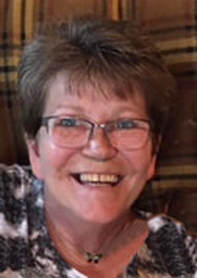 Mitze Arlene Rethwisch, age 57 of York, NE died Thursday, June 21, 2018 at York. She was born January 20, 1961 to Melvin Dean and Patricia (Piper) Nickels in York. On May 20, 1989 she was married to Mike Rethwisch at Waco, NE. Mitze was a member of the First United Methodist Church in York and was employed as a Home Health Care specialist for Tabitha Hospice in York. She was a member of the York Eagle’s Club, the York General Hospital Relay-for-life team. She enjoyed fishing, golfing, watching the Hallmark channel and thoroughly loved being with her friends and family in their pool.

She is survived by her husband Mike of York, three sons:  Matt Leinen (Amber Willoughby) of Norfolk, NE, Doug (Bree) Rethwisch, and Blake Rethwisch and his fiancé Frankee Massie all of York. Her grandchildren include: Brandon, McKenzie, Turner, Lillian, Liam, Cora, and one on the way.

She is also survived by her sister Debbie (Steve) Easley of Bartlesville, OK, and brothers Mike (Susan) Nickels of Deerfield, NH, Randy Nickels of Durango, CO, James Nickels of Morrisville, NC, and her step-mother Connie Nickels of York, several nieces, nephews and a host of friends.

She was preceded in death by her parents, her son Nicholas Leinen, her brother Bobby Nickels, grandson Bentley, nephews Jason Easley and Brandon Nickels.

Funeral services are scheduled for 2:00 pm, Monday, June 25, 2018 at the First United Methodist Church in York with the Reverend Art Phillips officiating. Visitation will be held from 1:00 – 8:00 PM, Sunday with the family greeting friends from 6-8pm. Memorials may be directed to the family for later designation.