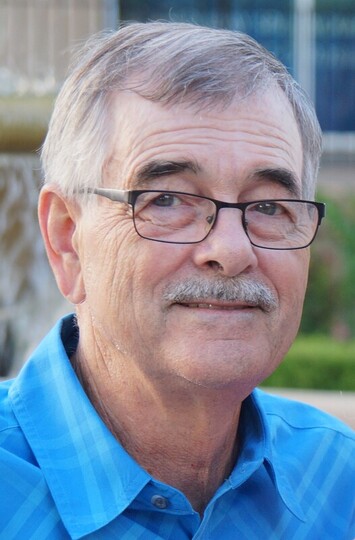 Milford graduated from Henderson High School in 1964 and Kearney State College with a bachelor’s degree in Industrial Arts. On July 28, 1967, he was married to Sharlene Siebert at Henderson.

His favorite hobby was scuba diving, achieving the status of Master Diver. His dive trips took him to the Atlantic, the Pacific, and many islands. He really did enjoy diving with sharks! Another pastime he enjoyed was riding his Harley to interesting destinations with friends. They belonged to the Modern Knights Motorcycle Club and met for frequent supper rides.
Milford enjoyed being involved in the church and community. He served as a Deacon for six years and numerous other church related boards at Bethesda. His service trips to Guatemala, Honduras and Bolivia were significant to him, allowing him to serve the Lord and others. He served 30 years as a volunteer firefighter and as assistant fire chief. He started a 4-H woodworking club, was a member of the Henderson Chamber of Commerce and Community Foundation. He was a faithful and loving husband, dad, and grandpa.

He is survived by his wife Sharlene of Henderson, son Jon (Heidi) Doell of Wichita, KS, daughter Cristina (Michael) Yutzy of Buhler, KS, grandchildren include: Isaac, Aaron and Samuel Doell of Wichita and Bethany, Abigail, Cameron and Christopher Yutzy of Buhler, siblings Marlis Nickel of Newton, KS, Melvah Emerson and Marvin Doell of Henderson. Also surviving is his father-in-law Marvin (Katherine) Siebert of Henderson, brothers and sisters-in-law: Delmar Siebert, Darrell Siebert, Shirley Ulrich all of Henderson and Mary (Dennis) Osborne of York, nieces, nephews and a host of friends.

Graveside services will be held at 9:45 am Tuesday, June 14, 2022 at the Mennonite Cemetery, southeast of Henderson. A Memorial service will then be held at 10:30 am at the Bethesda Mennonite Church in Henderson with the Reverends Andrea Wall and Chelsea Vaught officiating. Visitation will be from 1:00-9:00 pm Monday with his family greeting friends that same evening from 6:00 – 8:00 pm at the mortuary in Henderson. Memorials may be directed to Bethesda Mennonite Church for service trips or Mennonite Disaster Service.
​
Condolences may be emailed to Metz Mortuary Messages will be given to the family.
Find our featured Mortuary in Family Services, Funeral Services and Grievance Services featured as a York, Nebraska Business in York Marketplace.
Location: Metz Mortuary | 109 South Lincoln Ave | York, Nebraska 68467 | Phone: 402-362-3351