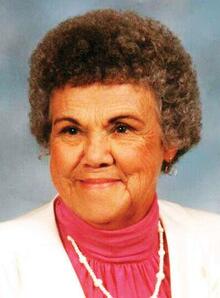 She was born Jan. 6, 1916 in York County to Peter Fredrick and Johanna Helen (Wilksen) Ehlers. She was baptized March 12, 1916 at St. Paul Lutheran Church, north of York and confirmed on March 29, 1931 at Zion Lutheran Church in Benedict. Louise graduated from Benedict High School with the class of 1933. She was united in marriage to Edward Francis Van House on Feb. 23, 1943 at Miami, Fla. She was a charter member of Faith Lutheran Church in York, LWML, Legion Auxiliary, York General Hospital Auxiliary and several Bridge groups. Louise’s devotion to her Savior and friends and family will be long remembered.