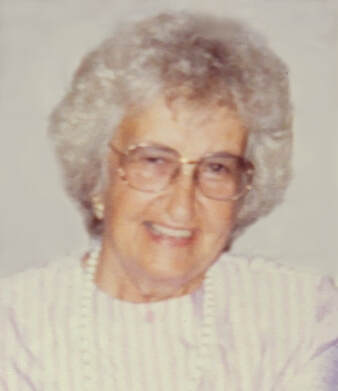 Maxine Stahr, age 98 of York, NE died Wednesday, May 4, 2022 at York. She was born on August 18, 1923, the daughter of Earl F. and Mamie (Schenck) Meradith, at the family home east of York, Nebraska. She was baptized at the First United Methodist Church of York on April 9, 1933. She attended country school, District 386, through the 8th grade. She then attended and graduated from York High School in 1941 with a Commercial Course, and worked for Lincoln Telephone & Telegraph for seven years.

On October 9, 1949, she was united in marriage to Marvin W. Stahr of York, and lived on a farm east of York. They were parents of three children, Jerry, Janie, and Jacque. Maxine was a devoted wife and mother and spent much time cooking, sewing, gardening, and all things that being a farm wife and mother entails.

She loved having friends and family stop in for visits, and they were often greeted with a cup of coffee and sweet dessert or pie. She was a member of the Farmerettes Extension Club, Lincoln Craft Club, Lutheran Women’s Missionary League, and was a 4-H leader for 10 years. She was a dedicated member of Faith Lutheran Church and its many activities.

In 1982, Maxine and Marvin semi-retired to an acreage across from Pawnee Lake near Lincoln, NE, and lived there for 21 years. They moved back to York in 2003 and have since resided there.

She is survived by her three children, Jerry (Sue) Stahr of York, NE, Janie Morgan of Ripon, CA, and Jacque (Tom) Dickey of Albion, NE, 10 grandchildren, and 18 great-grandchildren, as well as many nieces and nephews

Funeral services are scheduled for 10:00 am, Tuesday, May 10, 2022 at Faith Lutheran Church in York, NE, with the Reverend Ben Francisco officiating. Burial will follow at Greenwood Cemetery, York. Visitation will be held on Monday from 4-8 pm, with her family greeting friends from 5:30-7 pm at the mortuary. Memorials may be directed to York Faith Lutheran Church.
​
​Condolences may be emailed to Metz Mortuary Messages will be given to the family.
Find our featured Mortuary in Family Services, Funeral Services and Grievance Services featured as a York, Nebraska Business in York Marketplace.
Location: Metz Mortuary | 109 South Lincoln Ave | York, Nebraska 68467 | Phone: 402-362-3351