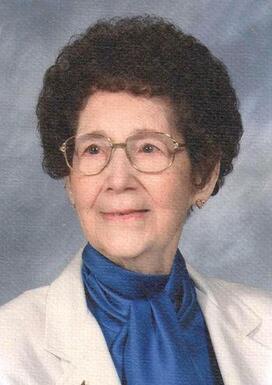 Maxine started work at First National (Cornerstone) Bank in May 1948 and was employed there until her retirement in 1986. She was a member of the East Avenue United Methodist Church.

Also surviving are two brothers, Rex Janes of Seward and Kenneth Janes of Espinola, N.M.; one sister, Treva Lind of Lincoln and a sister-in-law, Shirley Janes of Exeter.

Maxine was preceded in death by her parents, husband, and two brothers.

Over the years, Maxine was involved in many church and community activities. She enjoyed traveling with her husband Vern and loved spending time with her grandchildren. Maxine was a vibrant person who enjoyed life to the fullest.

Funeral services will be held at 2 p.m., Monday, Oct. 27, 2014 at the First United Methodist Church in York with the Reverend Art Phillips officiating. Interment will be in York’s Greenwood Cemetery. Memorials may be directed to the family for later designation.

Visitation will be from 1-9 p.m. Saturday and Sunday at Metz Mortuary. The family will receive friends from 4-6 p.m. Sunday.  ​