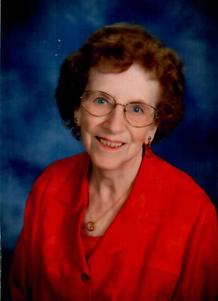 Mary was a member of the First United Methodist Church, United Methodist Women, Eastern Star, PEO, and the American Legion Auxiliary all in York. She enjoyed crocheting, singing, and watching Nebraska Husker Athletics.

She is survived by her daughters June (Mark) Austin of Papillion, NE, and Jacque (Kenneth) Meisinger of Atlantic, IA, and son-in-law Wallace Johnson of Chicago, IL. She is also survived by 13 grandchildren, 19 great-grandchildren, sister Myrna Brandt of South Dakota, and her sisters-in-law Lee Stingley of Norfolk, NE, Phyllis Widle of Arizona, and Dawn Burk of Lincoln; numerous nieces and nephews.

She is preceded in death by her parents, husband, Jack K. Widle, daughter LaDonna, 2  brothers and 1 sister.

Funeral services will be held at 10:00 a.m., Saturday, November 3, 2018 at the First United Methodist Church in York with the Reverend Art Phillips officiating.  Interment to follow at the Greenwood Cemetery, York. Visitation will be held from 1-8 PM Friday, November 2, 2018 with the family greeting friends 1 hour prior to the funeral services at the church. Memorials may be directed to the family for later designation.