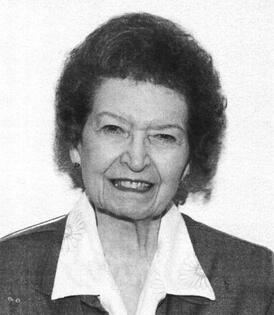 Mary Wylene Kennon Baker was born in Bardwell, Texas, Ellis County to her parents, Sam and Leonora and brother, Sam.

Wylene died on Wednesday, Nov. 26, 2014 at York. Growing up years were between Ellis County and Harris County (Houston). She graduated from Milby High School in Houston, Texas with a full scholarship to Rice University.

Family circumstances took her to California where she enrolled in George Pepperdine College, originally in the Watts area of Los Angeles. Working through college as a bank teller, one of her favorite customers was Lou Costello. Marriage to Elmer Baker began a new page in her life story. She completed her Bachelor’s degree in math education from East Texas State University.

Wylene has been connected to York College first as a student and then as a faculty member. The legacy of her connections ranges from Gene Hancock to Wayne Baker. She served as both math faculty and assistant director of Levitt Library. In addition to her academic responsibilities, she served as club sponsor for Delta Chi Alpha, treasurer for Delta Kappa Gamma, and treasurer for Helping Hands.

Pursuit of her children, (Carl and Kathleen Wheeler), in-laws (Frank), and grandchildren (Joel Baker, Frank Wheeler, Jr., Melissa (Baker) Swann and Philip Baker) provided summer and vacation destinations. While in pursuit of current family, she was actively involved in gathering genealogical information of family that was at that point unknown. Her own family name of Kennon came from Clan MacKinnon with Scots heritage.

Between East Hill Church of Christ services, Son Shiners, Round-Up, and a wide variety of events evolving from those groups, she remained actively involved in the work of the Church. Her belief and commitment to God and the Church was paramount in her life.

Wylene was preceded in death by her parents and husband, Elmer Baker.

Funeral services are scheduled for 1 p.m., Monday, Dec. 1, 2014 at Metz Chapel in York with Rick Eldred officiating and Clark Roush directing music. Private family interment will follow in Greenwood Cemetery, York. Visitation will be held from 1 - 9 p.m. Saturday and Sunday, with family greeting friends on Sunday from 2-4 p.m.

Memorials may be directed to York College in memory of Elmer and Wylene Baker for studies for archaeological research in Israel.  ​