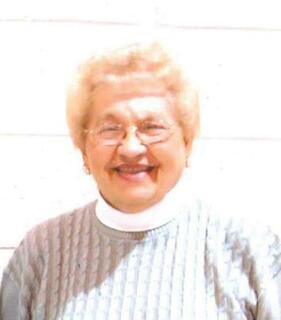 On Aug. 22, 2015 Mary Ann Blatchford died with family by her side after a short battle with cancer.

Mary Ann (Schulte) was born on June 30, 1930 on the family farm in Geddes, S.D. She was a child of the Great Depression and a product of her times as she was a hard working and inventive individual that shared what she had with others and provided a helping hand. Always generous with her love and support, Mary loved life but more so she loved her family, as she was a devoted mother to six children, a loving guide to her children’s friends and a doting grandmother and great-grandmother.

She was raised in Wynot and graduated high school and attended Beautician School in Sioux City, Iowa. During this time, she met her husband Darrell (Tubby) Blatchford of Maskell. They were married Nov. 25, 1948 and settled in Laurel where they raised their six children.

Mary was a beloved cook at the Laurel-Concord Public School cafeteria for 30 years, retiring in 1995. After retiring, she moved to York to be closer to her children and grandchildren. In addition to her love of cooking, Mary enjoyed gardening, embroidery, and making quilts for her family.

She was preceded in death by all six of her Schulte siblings, Wendell, Gilbert, Arthur, Caroline, Frederick and Daniel. She now joins them and her husband, Darrell (Tubby) Blatchford.

A Mass of Christian Burial is scheduled for 10:30 a.m. on Thursday, Aug. 27, 2015 at St. Joseph Catholic Church in York with the Reverend Monsignor James Reinert officiating. A Rosary Service will be held at 6:30 p.m. on Wednesday, Aug. 26, 2015 at Metz Chapel. Visitation with family will be held from 1-8 p.m. on Wednesday. Family will greet friends at the conclusion of the Rosary Service.

Private family inurnment will be held at Lincoln Memorial Park in Lincoln. In lieu of flowers, memorials may be made to Catholic Social Services.​